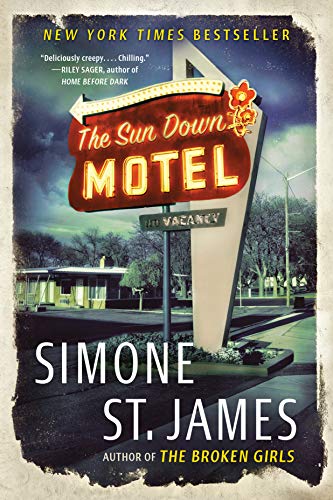 The Sun Down Motel by Simone St. James is a murder mystery that takes place in a town called Fell in Upstate New York and splits time between 1982 and 2017. This fictional work follows a young woman named Vivian in 1982, who disappears under mysterious circumstances after investigating a series of murders of young women, and Carly, Vivian’s niece in 2017, who heads to Fell to try to discover what happened to Vivian 35 years prior. The book is a combination of a who-dun-it mystery, with a supernatural tie-in. It is written in such a way that most chapters alternate between the two time periods as it tells the story of what happens to each of the young women.

The author, Simone St. James, does a really great job of tying the two timelines together throughout the novel. She also writes the characters well, providing just enough detail to keep the story moving and relevant. There are several underlying themes in the book as well but the one that struck me the most was the way that women, and especially young women, are characterized and stereotyped. Although acutely aware of the dangers that face them simply because of who they are, Vivian and Carly show strength and perseverance as they investigate the murders and disappearances of the young women of Fell. The Sun Down Motel is a great option for a casual read, but once I started it, I couldn’t put it down!