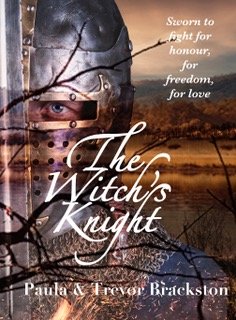 PROJECTED RELEASE DATE: MAY 3rd 2022 Available in store at The Inside Story or online through our website.

The Witch’s Knight, by Paula and Trevor Brackston, is the exciting first novel in the White Shadow Trilogy. The book bounces back and forth between 11th Century Wales, and modern-day London, as it tells the stories of Gwen, a young Welsh girl, becoming aware of her destiny, and Rhys Tudor, a war veteran turned bodyguard. The connection between the two is revealed as they are each challenged by mysterious events and the novel ends with a reunion of sorts and wonderful anticipation of the second book in the trilogy.

The settings in the novel are wonderfully depicted. The beautiful descriptions of the wild Welsh countryside are very descriptive. The valleys, mountains, rivers, and flora feel extremely real, and the villages and towns seem very accurate to those points in history. The clothing, weapons, tactics, and characters have a sense of realness to them, and the authors did a wonderful job building rich and complex stories for all the supporting cast. This ability to write characters that the reader is so invested in such a short time is a real gift.

The magic and lore in the novel were engaging and were probably my favorite part. I have read so many books that involve some type of magic, witchcraft, or sorcery, but the way that the fantastic elements of the book were built was very refreshing. It felt seamless to the story and to Gwen’s development as a character. The knight-protector role of Tudor is a great homage to undying love, and the end of this book successfully built a high level of anticipation for the rest of the story. The first book in a series tends to lean toward being a little dry, as so much of the text is usually dedicated to setting up the scene for the rest of the story, but this book managed to be exciting, in addition to getting the reader ready for the events to follow.

– The Inside Story Bookstore & Cafe